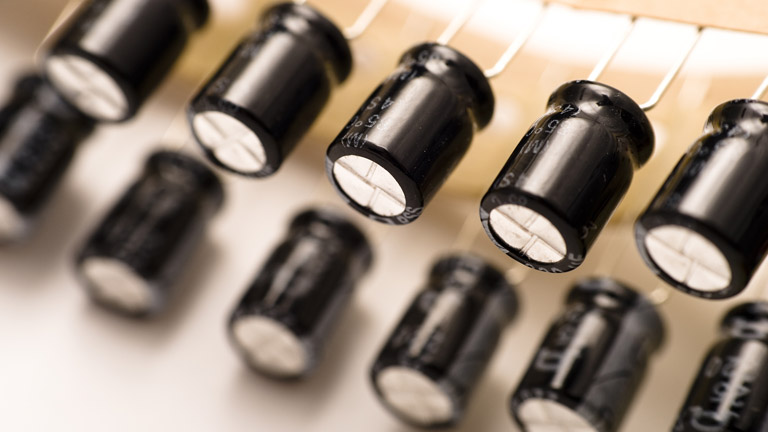 “So why do you replace all those capacitors?”

This question came about during a discussion with a guy who looks after the engineering stores of a food production company. We were discussing a repair that we had recently carried out for him on a sizeable VSD. I was showing him photos of the power PCBs and driver PCBs. He admitted to me that he could identify the capacitors but he didn’t know why we replaced them. Now here’s where I have a great deal of admiration for him, he didn’t know, so he did the right thing, he asked!

If you have any piece of electronic equipment there will be numerous electrolytic capacitors on the PCB. A failure of just one of these capacitors can cause your entire unit to fail.

By the time we see an electronic item for repair. Whatever it is like a VSD a servo drive, a power supply etc. It will have been in service for several years. The capacitors will have been doing their job quite happily but they do wear out.

But what is a capacitor?

Electrolytic capacitors due to their construction (two conductors, usually a sheet of aluminium foil separated by a liquid electrolyte and rolled up; a bit like a Swiss roll!) have a finite life. They weaken, they become dry, they become resistive, they increase ripple. These are all things you don’t want in an electronic circuit. Most capacitors in electronic systems these days are rated to a maximum operating temperature of 85 degrees Celsius. We like to improve the reliability of equipment we repair and refurbish, so as an internal repair standard we replace all electrolytic capacitors with 105 degree Celsius types. It’s just one way in which my company and other quality progressive repair companies can help to keep electronic equipment running longer. Which will provide quality reliable repairs, we upgrade the quality and durability of all wearing parts before they fail.

The conversation progressed as I started to explain the other components we replace as standard to enhance reliability further.

We replace all opto-isolators. They too have a finite life.
All relays are replaced as their contacts can become restive.
We replace all cooling fans as the motor bearings will eventually fail.
We reflow all solder joints as they can become dry and resistive.
Any component we see that is visibly heat damaged will be replaced.
All insulators will be replaced as they can become brittle.
Heatsink compound is renewed as the thermal properties change over age.

So what started as a conversation regarding capacitor replacement, really evolved into a full discussion regarding what we do to ensure our repairs are reliable and long-lasting.

So you could say that we don’t actually repair equipment here. We fully refurbish it. Inverter repair