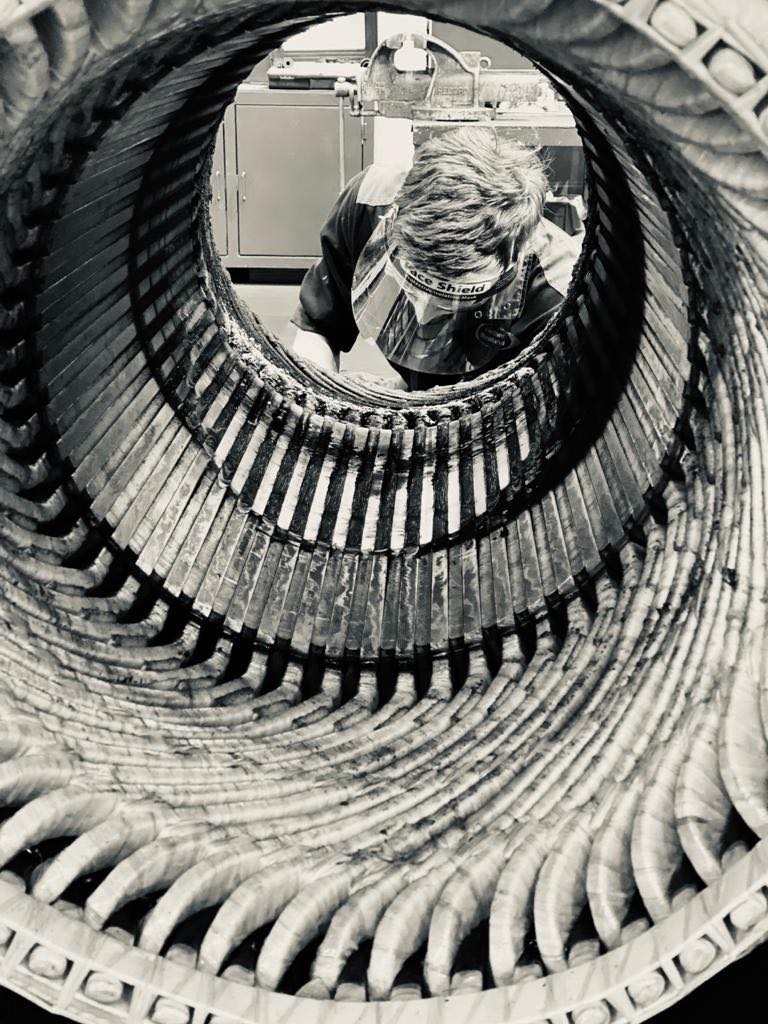 Matt Fletcher, Managing Director of Fletcher Moorland, explains how the motor repair sector is supporting the drive towards protecting natural resources and the environment.

It’s a pretty simple scenario; let’s say you have a 160kW motor that’s failed. You are either going to send it for repair or replace it. Does the environment (or, put more simply – recycling) play a part in your decision?

We recently carried out an exercise to see how much of a motor was recyclable. The results were quite surprising, really. The 160 kW motor, based on weight, was over 99% recyclable. Would that make you think again about repair versus replacement?

Just concentrating on the electric motor we repaired (or perhaps I should say ‘recycled’?), it was sent to us for a repair, the windings had blown, and new bearings were required – a pretty straightforward service.

We decided to judge the recyclability of the motor based on weight; this was the easiest variable to measure in our workshops. Before our eager engineers got their hands on the motor, it was weighed at 876kg. Pretty quickly, and because we were all interested to see the results, the motor was stripped down, the bearings were removed, and it was washed and weighed.

The windings were burnt-out, removed and weighed. Now I know there will be those of you who have been told that a rewind reduces a motor’s efficiency. But, providing critical steps are followed, it does not. This has been proven by a joint EASA and AEMT study, which was updated last year.

Without going into the individual weights of the stator core, rotor, windings, bearings, pins, washers etc., the total weight of the parts we were either reusing or being sent for recycling was 869kg. So only 7kg was going to waste!

Repairing electric motors is a process that’s over 99% recyclable.

I’m going to say with a degree of confidence here that repairing electric motors is a process that’s over 99% recyclable.

In 2015 the European Commission produced a communication to the European Parliament titled ‘Closing the Loop – an EU action plan for the Circular Economy’, the first paragraph says: “The transition to a more circular economy, where the value of products, materials and resources is maintained in the economy for as long as possible, and the generation of waste minimised, is an essential contribution to the EU’s efforts to develop a sustainable, low carbon, resource-efficient and competitive economy”. Read more here – The Circular Economy

The electric motor repair process fits in pretty well with that statement; my company and other repair companies are, and have been for a very long time, a crucial part of the circular economy. I’m just wondering whether an age-old process of making-do-and-mending has just been given a new name?