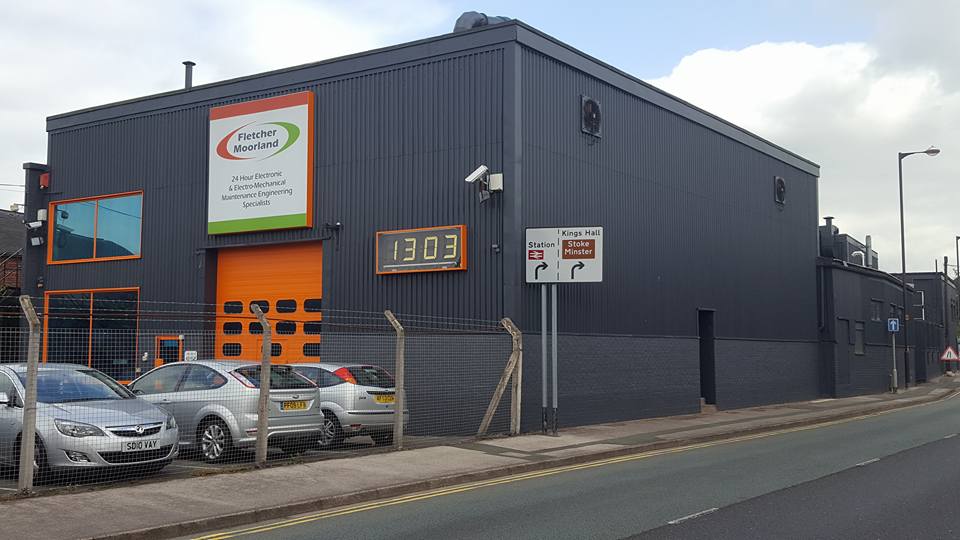 The time & temperature display on Fletcher Moorland’s building is famous in Stoke-on-Trent, If you’ve ever driven, or walked down Elenora Street, part of the A52 one-way system in Stoke town, you’ll have seen it. Many people only know us as – “That place with the clock on the front”.

Now let’s just wind back to the early 1980s where the story begins and let me tell you where the idea for the display came from. It was during trips to the U.S.A. when on EASA conventions that we saw many many buildings with time and temperature displays on them. Back in the UK we saw that there just weren’t many at all and none in Stoke-on-Trent. So we decided that we wanted one. This wording is written on the control panel for the display which is housed in our reception area and pretty much explains the history.

The display was built using vero-board back in 1983 by technicians and engineers in Moorland Electronics Ltd. Part of the design was to change the display from time to temperature and cycle every 6 seconds. The four 7-segment displays are operated by solenoids switching to show either segment ‘on’ or ‘off’ thus making up the figure to be shown. When the display switches over to degrees Centigrade, the symbol for degrees makes an appearance, switched by a solenoid of course.

The display has cycled around 170,000,000 (one hundred and seventy million times since it was switched on.

Now here’s the point about old technology. I find there’s an all too frequent move away from technology just because it’s ‘old’. Our time and temperature display is 32 years old, with little maintenance (and I mean little, the last time it needed any work was 2008) it works perfectly well. It does the job it’s intended to do. I’m pretty sure there’s new technology that could make the display look more impressive and have greater features but in our case, the display does the job it’s intended to and it’s reliable, so I don’t intend to change it. I’m no opponent to change if a greater production rate is required or a machine is required to have different features, but I do wonder how many ‘old’ systems have been replaced with new just because they are old?

Old doesn’t mean uncapable or not reliable, I’m not too sure that statement is true about the author, though, too many years of playing rugby and I feel like I’m falling to bits!

Have you ever seen it? please leave a comment if you have.