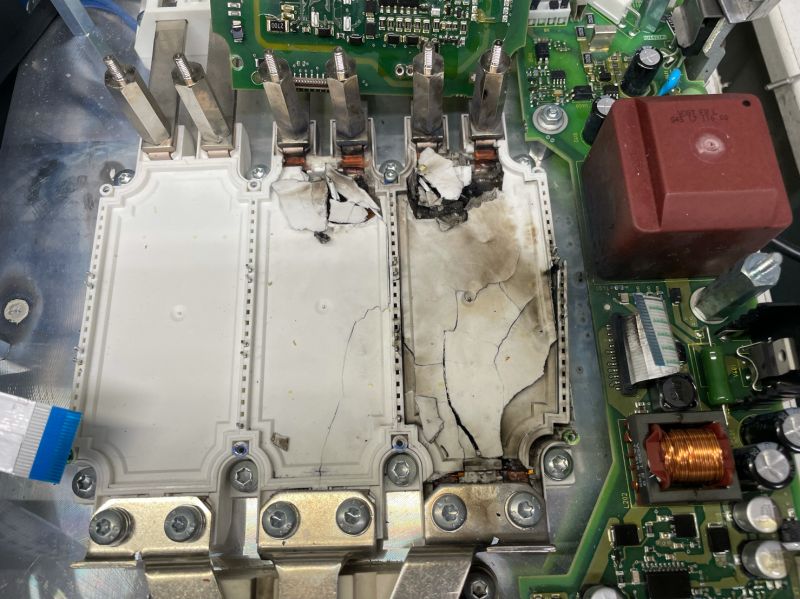 Whilst this may work when your PC or laptop stops working properly, it’s definitely not the thing to do when industrial automation equipment stops working.

It might sound pretty obvious really but it is something that happens all too often.

Just think about it for a moment, your machine tool or CNC stops working. There’s a reason for it, some are clever enough to detect a fault so shut-down themselves in the hope that someone will come and find the fault and fix it.

Then there are those that think a few pushes of the start button will do, often uttering “Oh come on, start you B@$£@&d!”

Having that mentality can cause even more problems with the equipment. Just take a look at the damage caused on this Siemens Sinamics servo drive. Before it was even opened up there were blast marks evident on the power connectors. In the repair trade you just know what you’re going to find when you delve deeper into diagnosing the faults. The failure in this was even more visually spectacular than expected.

The three white rectangular blocks you can see on the photos are the power devices (Power blocks or thyristors, basically the same thing) Two of them have ruptured. This makes the repair a much bigger task and more expensive that it should have been.

So, if you’re tempted to ‘switch off and switch back on again’ when you’ve got some industrial equipment not behaving itself, maybe it’s worth thinking again. You could just be doing more damage than you think.