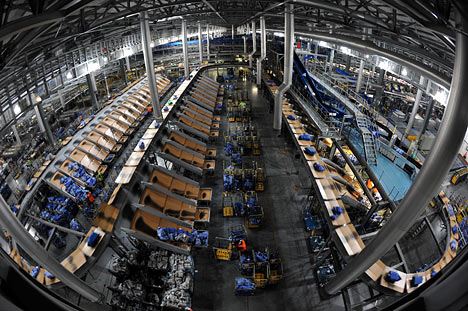 How over £500,000 was saved when an already obsolete unit became……more obsolete!

Obsolescence is an issue in industries there’s no getting away from it, however, there are many ways to tackle it. One of the things I see all too often is the willingness to strip out systems where there’s another, usually more cost effective solution. There are many great engineering companies, who, if spoken with could probably re-think your obsolescence problem.

The photo above shows a Compact Drive Unit (CDU) used in retail distribution centres and postal distribution centres. In essence, it’s a 4Kw linear motor with an inverter drive and control PCB housed in the chassis. Using multiples of these CDUs provides the motive force on complex conveyor & sorting systems such as this one at Royal Mail’s Heathrow Worldwide Distribution Centre. The manufacturer had changed hands many times over the years from Mannesmann, Demag, Sortec and Dematic.

We took on the repairs to these CDUs over ten years ago and failures usually showed as a failed inverter or overloaded motor. For many years we had no problems in repairing them. The inverter though was a bit special as it was a Semipower Driveblok, a 4Kw, low profile, fully potted unit with a fair amount of I/O and processing power. Several years back when we came to order our usual batch of 20 of these inverters, the manufacturer said to us that these would be the last made! An already obsolete unit was then made….more obsolete! Our first action was to hold a meeting with each customer to discuss options available to them. One of which was an upgrade to the units which on average would cost £500,000 per site and involve a great deal of downtime. Already I could see that many of the customers thought this was the route they’d be expecting to take.

We saw this as a challenge and decided to investigate our own solution. The inverter and control system which communicates to the sorter system is housed in the chassis. We had no more space then what was already there to fit a standard inverter in place of the specially designed, low-profile on in the picture. We also had to design and build a PCB which took all the existing control and communication data from the sorter system to the inverter.

Our development team took on the task of designing and building the new control PCB, the bare board was manufactured in the USA then populated and programmed by our own engineers. We decided on using an ABB 4Kw ACS150 inverter for the redesign, not only because ABB is our engineers’ preferred replacement inverter, the small package and footprint made it an ideal choice. Once redesigned and tested, we installed our system into the chassis where the space restriction is quite obvious in the photo below. Our next task was to ensure sufficient cooling of the drive so the airflow system was modified.

We’ve modified over 60 of these CDUs for our UK customers and it’s great to know that the knowledge, a can-do attitude and a bit of thinking has in this case, saved our customers several millions of pounds when they didn’t need to upgrade an entire system.

And here’s the final product, the motor has been rewound and encapsulated, the drive and control system redesigned and all within the existing package. What’s also important is that I know my company can continue to support this product, we are basically now the OEM.

I’d certainly encourage you, if faced with an obsolescence issue, to talk to your repair providers. There is so much knowledge, experience and wisdom in electric motor or electronics repair companies, go and find out, they may be able to save you a lot of money and time. We have, many times over for so many different industries.

If you wish to make contact with me or comment on what you’ve seen, please email matt@fletchermoorland.co.uk