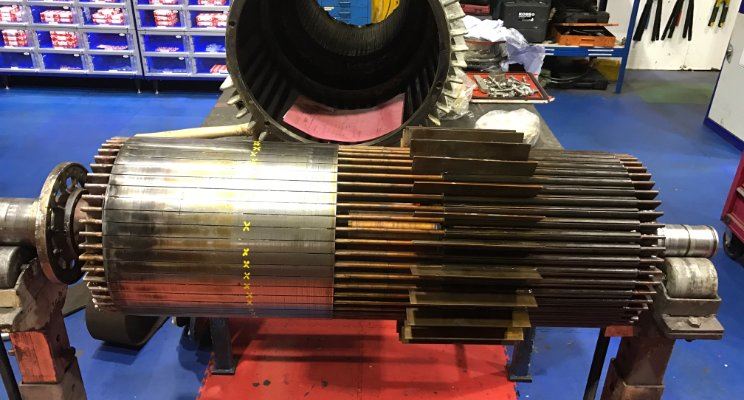 On first viewing you can see the rotor lamination pack on the left-hand side, then the cage extended to a length greater than the lamination pack, there are air agitation fins on the extended cage and what looks to be another alloy cladding the extended cage. I’ve had 35 years in and around the motor repair business and this was the first time I’ve seen such a machine. So, how does one find out about such a machine in this day and age?

A handful of people recognised that it was a Brook Crompton pipe-cage-rotor machine. It’s the first time I’ve heard ‘pipe-cage-rotor’ too.

With the networking power of LinkedIn, there was one person who knew these machines very well indeed. Steve Cockerham ‘now Regional Sales Manager, UK and Ireland for ATB Group’, who used to work for Brook Crompton, Steve provided a wonderful description of the motor and how the pipe-cage works. It was down to Steve that I’m able to provide this description now –

‘That’s a Brook Crompton pipe cage rotor, or as they were otherwise known an “integral eddy current inductor” which was essentially a relatively unsuccessful if very novel attempt at a cage motor which replicates the starting performance of a wound rotor or slipring machine. typically low starting current and high starting torque, figures like 225% LRT and 400% LRC were typical and they were intended for mills, crushers etc.

The silvery core on the left is the rotor core and there will be an equivalent stator core in alignment. The section on the right is a series of steel pipes which extend from the core and are both supported and shorted out by spidered steel discs under the pipes.

A really novel design which never really took off, I’d be surprised if they managed to get into 3 figures of units in production. The pipe cage assembly acts as a series of individual short circuited transformers with the rotor bars as their respective primary windings. The pipe forms both the core and secondary winding of these transformers which are short circuited by the supporting discs.

The pipes are made of steel and therefore exhibit a high electrical resistance which is further increased when the primary (ie rotor) current is at mains frequency. This is due to skin effect, which makes the effective pipe resistance dependent upon rotor frequency and hence motor speed.

At start with rotor current at mains frequency, a longitudinal current flows in the pipes and adds impedance to the rotor circuit. Both the resistance and inductive components of this impedance are dependent upon rotor current and frequency, and therefore decrease as the motor accelerates to full speed.

It is this automatic adjustment of impedance that gives the pipe cage rotor its torque, current and speed characteristics. Starting current is decreased at start in comparison with a normal cage machine and the additional resistance increases the starting torque.