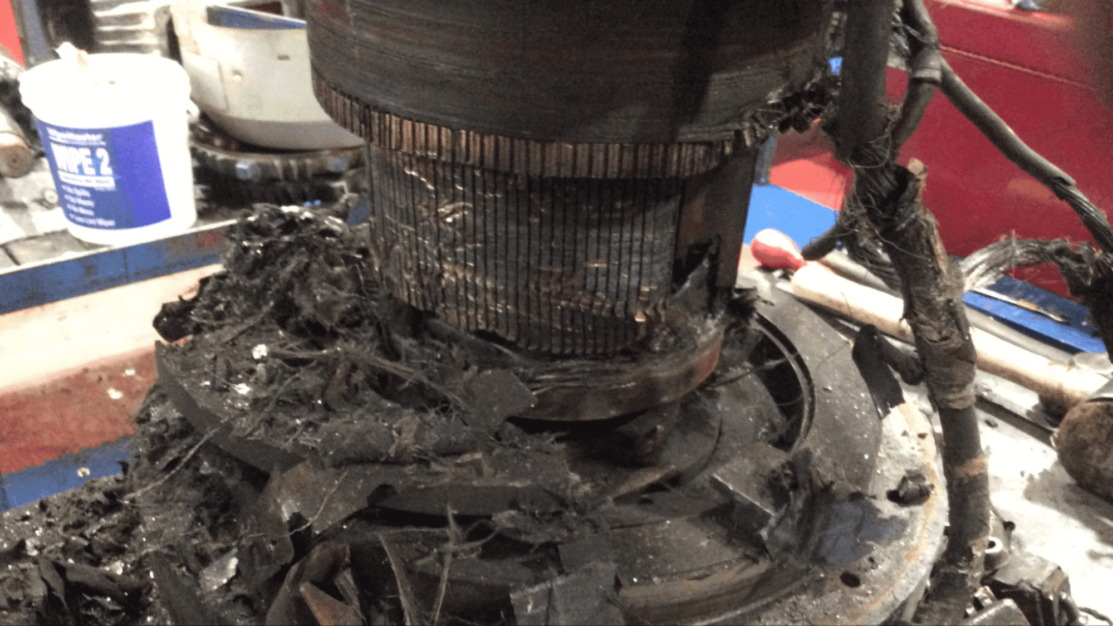 A few week ago I posted a photo of a failed DC motor where the commutator has failed and taken out the brush gear. The failure was quite spectacular and the photo prompted many, many comments. I promised to post an ‘after’ photo when the repair had been completed but instead of just a photo, here’s a brief article about the repair carried out.

The motor is a 73Hp, series wound DC, group I, EExd machine. When we stripped the machine down the first sight that welcomed us was the photo you can see above, quite a failure indeed. I then posted a photo of the commutator and invited LinkedIn users to give their opinion as to the cause of failure.

Now I do realise that without all the facts, judging a failure by looking at one photograph is an almost impossible task. However I do thank those of you who commented, some comments were accurate, some close and some just bizarre considering it was engineers commenting. One that immediately springs to mind was ‘you’ve lost a phase from the three phase supply’.

Now the repair itself; the only good parts which we could reuse were the motor casing, the armature laminations, the pole pieces, bearing cartridges and end-shields. Not much really and if this were a standard, easily replaceable motor then I’d be suggesting to buy new, however, it isn’t, so a repair is the only option available to us. We replaced the commutator, wound new interpoles, fields, and armature coils, replaced the brush support ring, brush boxes, brushes, manufactured a new shaft and checked and reclaimed all flamepaths (we are an IECEx Certified Service Facility too).

The result? well here’s an ‘after’ photo of the same motor

Quite a difference isn’t it?

Now I fully appreciate that each of you will have great examples of how you’ve resurrected machinery many thought should be destined for the scrap heap. It’s one of the reasons I love this industry, we almost perform miracles for our customers.

Thanks to all of you who made comments on my initial post, it’s great to know there are so many of you out there who are genuinely interested in engineering and companies like mine who fix things.

Putting the two photos together really shows the difference

I genuinely enjoy seeing other ‘before and after’ photos too, so please post some that your company has done and help spread the work of the great things repair companies can do.